IntiQuan is holding a series of free webinars based on IntiQuan’s R-based open source modeling & simulation platform
IQR Tools. The topics range from model representation over population modeling, both in the context of PK(PD) and QSP, to advanced clinical trial simulation, considering drop-out and compliance models.

One of the many advantages of using IQR Tools lies in the fact that a model only needs to be coded once, and this is done in an intuitive format that relies on simple math. Behind the scenes conversion is done in an automatic manner – independent if it is to C-code (for fast simulation) or to NONMEM or MONOLIX (for NLME parameter estimation). In addition, the model syntax is application agnostic, meaning that IQR Tools can support both Pharmacometric and QSP modeling in an identical and equally intuitive manner.

Due to the breadth of topics to cover on the topic of MIDD, we decided to modularize the webinars. This allows for short duration single webinars that allow sequential participation. 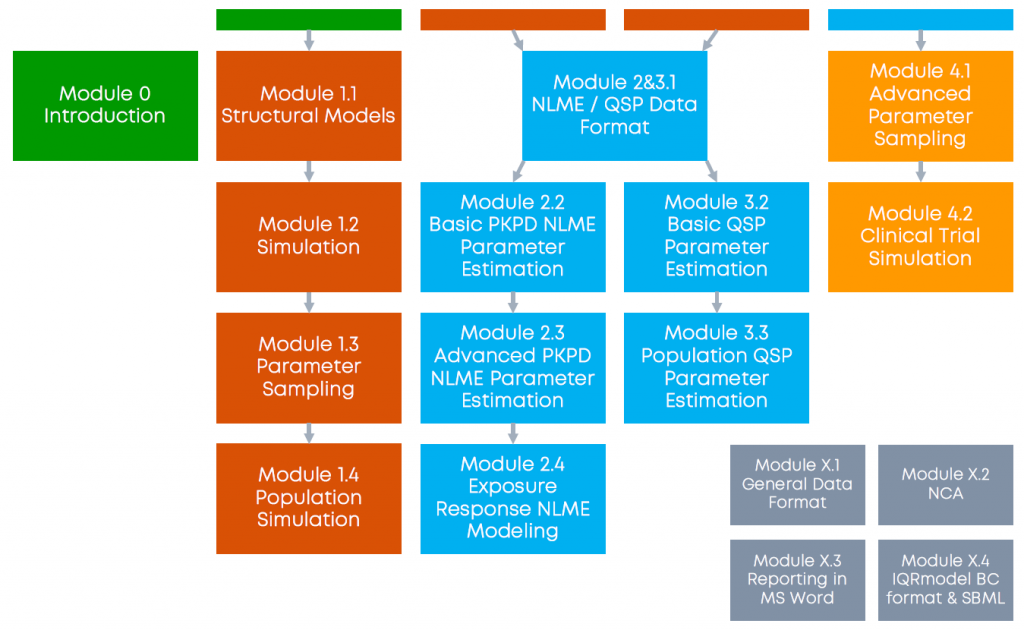 Each webinar module is self contained but assumes (at least some basic) knowledge of the previous modules. QSP and PKPD webinar modules are independent of each other.

Material for each module is provided to participants as a download, including the webinar presentation (PDF) and all examples and scripts that allow to rerun.

Not many. You can just watch, listen and get information about state-of-the-art modeling and simulation approaches.

If you would like to run the examples yourself you will need to have an installation of IQR Tools on your computer. Installation is very easy and explained here.

Registration for each webinar module is free of charge but places are limited. You can register from the following webpage: https://training.intiquan.com

Goals of the different modules

Note that currently not all modules are listed below – this will be updated as the webinar series progresses in 2021.